On Ethics: 4 Poems by Sofia Kioroglou; Art by Bea Garth 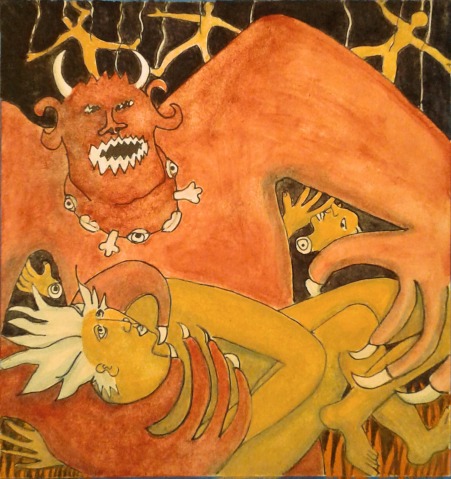 by Sofia Kioroglou, copyright 2018
.
In search of a morally univocal answer
There is either right or wrong,
No tertium quid, no equivocity
.
Seek for the truth,
and meet with scandals and horrors
in multivocal clamor
.
You do not need bombs and bullets
to hush people’s gums and blur the truth
Terror can be masqueraded as substantive laws
.
Superpowerism as a promotion
of global movement for democracy
A regression of freedom into monarchical dictatorship.
.
If plongeurs thought at all,
they would long ago have gone on strike
Eric Arthur Blair mutters over his Chardonnay
.
The truth is diluted like wine
the sheeple are thrown into a quagmire
“Liberty is telling people what they do not want to hear”
.

State secularism a notion of yore

by Sofia Kioroglou, copyright 2018
.
With my husband engaged in fighting,
I must perforce cover my face
a sort of repression seeping into my life
contaminating my existence, a vicious putrefaction
.
State secularism a notion of yore
our Syria under the rule of extremists
without a male relative I must endure
a future so bleak under house arrest ad infinitum
.
In today’s world of putative justice,
females always remain shortchanged
where rape and sexual abuse will thrive
the crowning with thorns I strongly endure and suffer
.
Note: Originally published at “I am not a silent poet”
.
.

by Sofia Kioroglou, copyright 2018
.
Always be a noble man
even on a foundering vessel
stand aside and let the frail fill the life-boats
Accept death calmly
and endure your going
hence even as your coming together
There is nobility in the world,
not everything is darkness
ergo ally yourself with the good.
“Ripeness is all”
.
.

by Sofia Kioroglou, copyright 2018
.
In between nothing and everything
there must be something
I don’t know what to call that
.
My dad used to say that even silence
can be your most vociferous critic
even deafening to your ears
.
The obvious cannot be ignored
everything can be seen directly
except the eye through which we see.
.
.
Bio: Sofia Kioroglou is an award-winning poet residing in Athens, Greece, with her husband Peter.  Her poems have played on the radio and are included in many  literary journals and books that include Dumas de Demain, Galleon Literary Journal, Pengician, Lunaris Review, VerseWrights, Galway Review, The Outlaw Poetry Network, Festival For Poetry, Verse-Virtual, Degenerate Poetry, Ariel Chart, Excavating the Underground, Spillwords, In Between Hangovers, Writink Page, Silver Birch Press, The Blue Nib, Poetry Super Highway, Halkyon Days, Ashvamegh, Fractal.gr, and Winamop.   To learn more about Sofia Kioroglou’s work, visit: sofiakioroglou.wordpress.com
https://www.facebook.com/Sofia-Kioroglou-1851168701772737/

Bio: Bea Garth’s award winning dream like narrative surreal art has been shown in a variety of galleries in and around San Jose, California and now, back in the Pacific Northwest, so far in Vancouver, Washington and Portland, Oregon. Currently she is president of the Oregon Women’s Caucus for Art. To  see more of her art and poetry go to: https://bgarthart.com