My philosopher/astrologer friend Graeme Jones said we are going through a dark time of letting out our collective demons—which has made everything that much more confusing. I cannot agree more. This, I believe, has created a spiritual dystopia for many so that depression and feelings of anger, helplessness and agitation are becoming more common. The question then becomes what we can we do in the face of all this confusion?

As I see it, we can almost all agree we live on one planet and share the same basic needs of food, shelter, and warmth, as well as cultural needs such as belonging, caring, meaningfulness, aesthetics and some form of love. Of course, there are those who are lost in greed and are oblivious of the needs of others. And others who simply do not have the mental faculties to look at the big picture. However the vast majority of humans on this globe seem to be starting to realize we are in this together and that something must be done to change our ways since the very safety of our eco-system is at stake, not to speak of the quality of life for us as humans on this planet. As a result I am pretty certain I am not the only one who believes a new paradigm is struggling to be born in the process.

This paradigm shift is the stuff that creates cliff hanging drama and yes eventually becomes the stuff of myths. Meanwhile however many are and will continue to suffer—not only humans but also the other creatures of the Earth and the eco-systems we all depend upon — the drought and resultant mass starvation in Africa (http://www.aljazeera.com/news/2017/03/famine-united-nations-170310234132946.html) being just one example.

Nevertheless, despite our suffering, many of us are now called upon to rouse ourselves out of the feeling there is nothing we can do to change anything for the better despite the fact that the forces are so large and overwhelming. Thus more people are starting to take action even if many of us continue to be confused.

I believe a major part of the paradigm shift is the return of the values of the Feminine and the re-discovery of the importance of the individual Soul, and the collective Soul we all share despite our varied differences. This I believe was graphically symbolized by the recent Women’s March on Washington that spread in cities throughout the world. The psychologist Carl Jung talked about this. He suggested that it has been as if the World Soul became fragmented in the Patriarchal Age. Since then, the World Soul has been yearning to reconnect—in particular Man and Woman. In the Patriarchal system, it has been true things have largely devolved into every man or woman for him or herself. Money, Power, Efficiency and Greed have replaced God and the connection with Soul and the old feminine values of Nurturing, Caring and Wholeness. Thus through time everything has become more and more fragmented and often meaningless or inhuman with each group pitted against the other. While, in the meantime, women are often still at the bottom and care and nurturing for the Earth is an almost forgotten afterthought.

Carl Jung suggested that during the next paradigm shift, the Feminine will re-join with the Masculine in a more balanced way. He continued to say it was important for this to happen rather than have Humanity teeter into a shift of extreme superstition and conservative fear of change. I agree with Jung that it is crucially important to not return to a world that abhors change or even an enquiring mind in order to feel at one with our society(s). However the full hearted embrace of devolved Patriarchal values without care for the larger consequences except for promoting power, the lack of ethics and the primacy of money has come at a huge cost. More authentic Patriarchal values need to be integrated with and harmonized by the rising Feminine values of Humanity living in harmony with Nature and caring for each other–which means everyone, the poor and downtrodden as well as the middle class and rich.

Meanwhile President Trump has created fear, confusion and anger in many of us on the Progressive Left–as well as those who no longer feel they are served by any party or political position. In addition, long term undermining forces of our Republic seem to be pushing for yet another war in the Middle East or at least a return of the Cold War. The military industrial complex and those who serve them seem to be purposely oblivious to the fact so many here in the United States (as well as across the globe) are either out of work or have difficulty paying for basic necessities–and do not want more costly wars. Even Trump with all his promises seems to be letting his professed caring and awareness for poor Americans go down the drain while he surrounds himself with his right wing war mongering billionaire cronies.

In the current social and political climate it becomes almost too much to bear for the common person to acknowledge the continuing signs of of our degrading eco-system. So much bad news becomes a deluge creating depression or anger and confusion in most normal human beings, especially with Trump eviscerating the EPA, and the Republicans in America’s Congress joining the pack by trying to axe it and other needed programs altogether. However I believe, despite this deluge, it is better to embrace our humanity rather than react especially in ignorance and fear of others.

I think this is our opportunity as citizens to transcend our usual American Alienation. We need to figure out what we can do to help each other so our country does not continue to further devolve into yet another full on Fascist Regime. And yes I believe we need to retake our government(s) and media by getting involved as much as we can rather than be the helpless passive bystanders many of us on the Progressive Left have been these last 40 years.

After so many of our leaders were killed in the nineteen sixties through one means or another, there was what seems to have been an almost unconscious impact on the Left to not really rock the system or effectively act against the military industrial complex. Many just gave up being active in politics and focused instead on spiritual matters. This has in many ways changed the world for the better, although it has become all too clear that it is also critically important to pay attention to what is going on. Meanwhile, as we wake up, it is becoming more obvious that the Military Industrial Complex has continued unabated, such that it is now called “The Deep State.” In its greedy single mindedness it does not seem to care for the fact it is eating us and the world alive.

Given current events in Washington with the probable breakdown of support for many basic services in the USA, I believe it is important for us as citizens to develop a critical but open mind and look at all the facts possible while doing what we can to take action and make a real difference. My past study of political science and psychology showed me how easily either the individual or public can be swayed by emotional appeals such as what happened in the USA with the 1950’s McCarthy Red Scare, or Fascism under Hitler or Mussolini in the 1930’s.

History teaches that looking underneath the story is really important, no matter who is presenting it if we want a more clear understanding of what is going on rather than just react. If we become close minded and fearful, we can be easily led astray by our emotions that soon get out of control even if we otherwise think we are being politically correct. It is thus important to become more discerning and try to understand what are the motivations of the major actors involved, what is the history and what are the patterns coming up? And who is it we are being led to be fearful of and why? Thankfully more of us are becoming empowered to act and speak up; we just need to do so with more heart and intelligence.

One of the best suggestions I heard recently was at a poetry reading here in Vancouver, WA. The young woman suggested to the crowd that we should all make a practice of reaching out and ask each other how we are doing, even at the check out counter. And make a policy of not just saying “Fine.” The point is that divisive politics need to end. We are all in this together. We are the 99% after all — being manipulated by the 1%. That needs to stop by going inward and reaching outward to create common ground.
“The Harmony of Balance,” digital image by Human Distortion, copyright 2017
We need to start communicating with each other in a supportive way as a society if our Republic is going to survive these next few years. We can no longer afford the luxury of being alienated. This goes for those we disagree with too. Honestly it is my observation that we of all ilk often have more in common than we realize.

I want to reiterate what both Graeme Jones and Human Distortion suggest, that by meditating and becoming more centered, we will become more equipped to respect our differences while finding common cause in the most unlikely places. We can then start having more clarity while feeling our common Humanity. 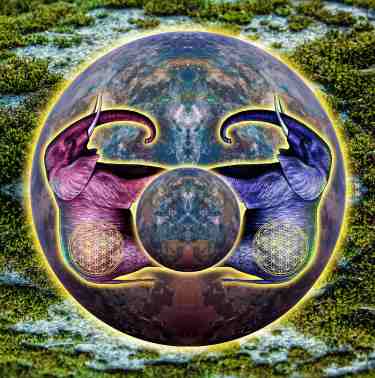 “The Harmony of Balance,” digital photo by Human Distortion, copyright 2017

Thus, rather than let our collective demons and their minions sew fear between us, we can begin to take more effective action with the combined resonance of the Inner Spirit we all share working for us despite whatever cultural/religious differences we may have.

These are exciting but challenging times in which we get the chance to create a New World with more positive caring respectful values rather than continue to allow the emergence of a strange Fascist dream to completely overtake us. This will not be an easy task, but I think it is well worth it. Creating a healthier Future for us as Humans and for the Earth and its Creatures is in the balance.

Bio: Bea Garth is an artist and poet as well as founder and editor of Eos: The Creative Context . Bea has extensive skills and experience as an artist, poet and organizer/editor both in the San Jose, CA area and previously in Eugene, OR. She has a degree in political science with a minor in philosophy. Although her main focus is on her own artwork and creative expression, the times are calling her to be more active with this e-zine and expressing her own social and political insights as well. To see examples of her artwork and poetry click http://bgarthart.com.

Bio: Human Distortion is an East Coast activist, artist, musician, and shaman who is trying to heal the divide between man and nature. Please feel free to comment if you either agree or disagree with him. If anyone wants to reach him for clothing design, or to get active in organizing, please go to: https://www.behance.net/humandistortion . He also has a page with prints, tapestries, shirts, etc. for sale at https://society6.com/humandistortion .