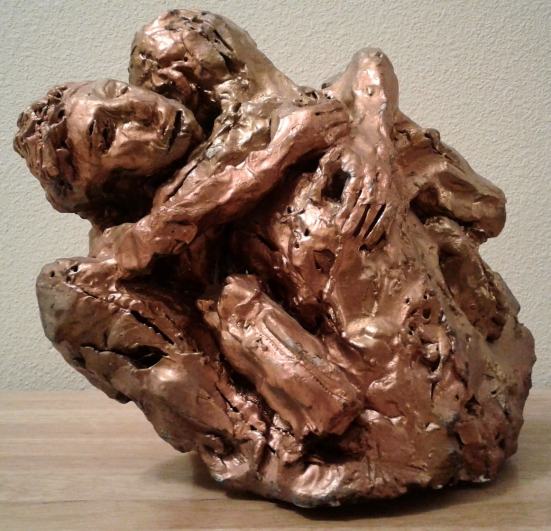 All The Regrets In This Small Town
by James Diaz, copyright 2017

Who is this man who sharpened his knife by moonlight
instead of holding you like precious stone pulled out of the earth
who spat after every meal you made him and passed out on the rug
you’d have to clean later?
I want to make a fire in these woods and toss his ghost into it,
see we’re all bad, we’ve all catered to demons
fucked someone over
and walked away from the scene of our crimes
been the bramble and the rose
the water and the drought
the rifle and the flower in the barrel
the junkie and the recovered
and the list so long that we never reach the end of it
we’ve all had it so bad
we don’t even know what good feels like anymore
when the wind blows this damn hard
you got to hold on even harder
we’re made of this
fighting inside that won’t let us quit
made of all these wrongs
and all these rights
and crashes into the wall
some of us have to hit hard
before we can let go.

Because You Asked
by James Diaz, copyright 2017

i’m folding fools gold
in the only way i know how
four squared and captured
hearts, heat basket
lonely and bone drunk
way i dance when
no one else is watching
is two hands wrapped around
a losing streak / color me
in like the laziest line
all my dreams gone ragged
in the stormy wind
and my god it gets
loud in the undertow
how have i become this way
rotten boards / foot loose / eiderdown
Polaroids from long ago
the shadow hunches lower
then i do these days
my best bet was always on you
name in golden letters
under the kaleidoscopic tavern
hearts get so used
it’s a fire sale every night here
everyone must go… their own way
oh losing is such a fine art
it’s my only friend
how the wind picks up
and scatters my light
every which way but home.

The Places You’ve Been
by James Diaz, copyright 2017

lyrically, I am faded already
they are forging papers
for what happened
he had a good life
as far as lives go
he never wanted
but my god
how hard he needed
all that couldn’t possibly be given

how spare a life
from the fire inside
how hold a child
has never been held
how slow down
the losing?

Valley stretched out
like open arms
a warm meal
before the snow
the next bend in the road
there is nothing you won’t lose
too much of in this place.

Bio: James Diaz is founding editor of the literary arts and music journal Anti-Heroin Chic http://heroinchic.weebly.com/. His poems and stories have appeared in Quail Bell Magazine, HIV Here & Now, Cheap Pop Lit, Foliate Oak and other online and print journals. His debut book of poems, This Someone I Call Stranger, is forthcoming from Indolent Books early next year. He lives in upstate New York.

Bio: Al Preciado is an art teacher at Bellarmine College Prep and has also taught in New York and Los Angeles. He has managed 3 galleries, Meca in Santa Ana, The Overpass Gallery and Gallery TEN10 in San Jose. He has shown in Germany, Italy, The East Coast and at many venues in California.

Like Loading...
‹ “Memento Mori: a Requiem for Puerto Rico” by Miguel A. Cruz-Diaz; art by Al Preciado
“Crossroads and other poems,” by Tamsen Grace; drawing by Bea Garth ›