“Modern Propaganda: The War On Our Consciousness” commentary and art by Human Distortion

Editorial Note: This article by the East Coast shaman Human Distortion, is very appropriate for starting the New Year given the political and personal challenges that are ahead of us. It is a call to action for us  to learn more discernment to see through the misrepresentations of many of our politicians and the media, get more closely in touch with our inner self and what sustains us, and make choices to help create a better world for ourselves and humanity in general.

“Modern Propaganda: The War On Our Consciousness” by Human Distortion, copyright 2017

A whole lot of truth and propaganda has transpired since the U.S. election announced Donald Trump as the next president, or is he? Well, as far as the mainstream media is concerned the Democrats rigged the election. Wait, or was it the Republicans who rigged it? But I thought Russia hacked our servers and manipulated the election somehow….If you are confused, it is okay, you are supposed to be. 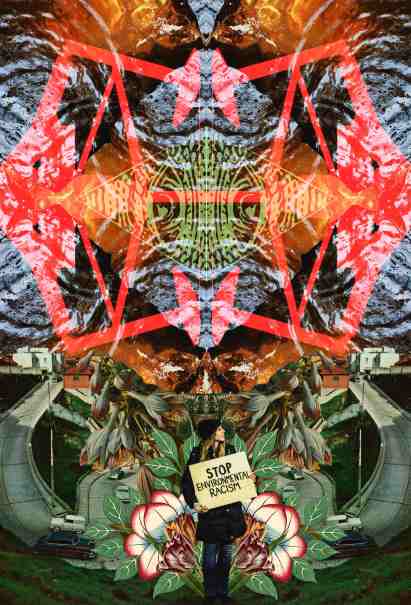 This is because the information you receive (from the mainstream media and alternative media) is propaganda, which has been carefully manipulated. The reality is that the world we live in is a lie controlled by a cabal of international banksters, CEO’s, Masons, Illuminati, Bilderberg members, etc. who’s agenda is a one world government, which has been called the New World Order.

Although, many people have already woken up and are waking up to this thing we call “reality”. They have been able to discern for themselves what is truth and what is propaganda. I do not bring up the aspect of a New World Order, or the Illuminati to scare anyone or fear monger (unlike Alex Jones, but more on him later). I am writing about these things because they are true. The system was designed to keep us oppressed.

I will give you an example, remember Flint, Michigan? They have had no clean drinking water for the last three years now, yet the Nestle company wants to increase siphoning millions of gallons of water a minute from an aquifer in Evart, Michigan. This comes out of a lawsuit between a group called the Michigan Citizens for Water Conservation, who sued Nestle Waters North America (a division of Nestle) and came to an agreement to only siphon 200 million gallons of ground water a minute in Osceola County, Michigan. As opposed to the 400 million gallons a minute originally planned to be siphoned. This is not deterring Nestle, though, from pushing for a $36 million dollar expansion at their Ice Mountain bottling plant in Evart, MI. Which includes increasing the amount of 150 million gallons to 400 million gallons a minute to be pumped. What does this tell us?

It tells us that corporations will pump out the vital ground water needed to help sustain marshes, wetlands and other integral parts of our environment, in turn destroying them in the process. Only to bottle that water in a plastic container that is not biodegradable, filled with BPA, and that only contains a pH level varying between 3.8 to 6.5 (yet pro-Nestle pH reports will put the figure between 7.4 to 8.0). Pure water is considered to start around a pH level of 7.0, which is healthy to drink. So, what Nestle does is destroy the environment by removing ground water, only to turn it around and sell it to the citizens of Flint, Michigan. Where a good portion live below the poverty line, which makes having to pay for low quality water, that comes in a waste creating container that much more effective at oppressing people. According to the Beverage Marketing Corporation, the U.S. consumed $14.2 billion, in wholesale dollars, worth of bottled water in 2015. Total bottled water volume grew to nearly 12 billion gallons.

This is merely one tiny example of total control within a massive tapestry of carefully orchestrated illusions reaching back at the very least 500 years. For now, though our focus is going to be on the modern propaganda of “real news” versus “fake news”. If you still think that your vote and leanings towards a party affiliation has anything to do with the outcome of who will be the next president, then it is time to come to terms with some hard truths. Regardless of this election being rigged (just as all others have in the past), neither puppet / candidate represents anything that I or most people I know, or have met in my lifetime are concerned with. Quite simply, both Clinton and Trump represent the agenda of the wealthy. They do not have any of our best interests at heart, do they even have a heart? I am still amazed that we even allow “candidates”, who are in a completely different class of socio-economic-political power to work on behalf of all of us and our needs. But, I am probably “crazy”, or a “communist” for believing that we can all do so much better than we are now.

So, if neither the Democrats, nor the Republicans rigged the election, then it was definitely RUSSIA! Yes, here we go again, time to ramp up some good old propaganda to get us into another war. I am not saying that Russia or China do not have their own problems, corruptions, and agendas. But it just looks like the U.S. is diverting attention from its own wrong doings, making us forget about Standing Rock, Pizza Gate, anti-abortion legislature in southern and south west states, the continuing genocide / rape in Myanmar, Syria, Flint-Michigan, Black Lives Matter, Global Warming, Italy’s upcoming vote to leave the EU, Monsanto, taking homeless peoples blankets in Denver-Colorado, the ever increasing extinction of animals, deforestation, the massive depopulation of bees due to pesticides, and the list goes on and on. It was definitely Russia, though.

All I am saying is to be incredibly discerning with the information you receive. If something does not sit right with you, then consider it further. Confront the issue for yourself, and definitely do not let people like Alex Jones, Brian Williams, Bill O’Reilly, or Lester Holt do your thinking for you. The difference between “fake news” and “real news” starts with you as the viewer, are you willing to seek the truth out, regardless of the source of information (whether mainstream or alternative)? Especially when we live in a country that openly spies (once covertly) on all of us, yet we have agencies that are supposed to protect us (FBI, CIA, NSA).These agencies only protect the private interests they serve by manipulating the actions of American citizens who try to expose their lies into terrorists, whistle blowers, and martyrs (it used to be communists). Sounds like fascism to me, and this is nothing new by the way. The U.S. has been spying on its citizens for at least the last 70 years, especially those that share an opposing view point with the government when it comes to issues of freedom and liberty.

I feel that we must do for ourselves what those in charge will not. It begins with a personal examination, which will lead you onto a journey of deconditioning yourself from a lifetime of lies, and suffering. For me, I decided to become vegan because I do not support the unnecessary suffering of animals. I do not support the unnecessary destruction of the planet due to the animal agriculture industry. Which produces 32 million tons of carbon dioxide a year (CO2), or 51% of all greenhouse gas emissions. Also, the amount of animal agriculture water usage is responsible for 80-90% of U.S. water consumption. Not to mention that the use of human antibiotics in factory farmed animal agriculture causes an estimated 2 million illnesses and 23,000 deaths a year (CDC), which is caused by drug resistant bacteria. So, if the food that they sell us is killing us and making us sick, then what else does our country do to harm us?

While the rabbit hole may be dark at first, I promise that as you seek the truth out for yourself you will find en”light”enment. I believe that we can live in a world that is not shackled by money, religion, or government. I believe in the infinite resilience of humanity to finally overcome millennia of oppression by no longer being used by systems that are designed to fail all of us. There are renewable energy alternatives that have not been sufficiently supported by our government such as solar and wind (unlike oil and nuclear (and soon coal) which continue to have huge subsidies by the government), and inventions like the Tesla Coil are left to founder rather than being further investigated for possible creation of more sustainable free energy sources (for more information on Tesla’s invention see http://pesn.com/2011/04/29/9501818_Tesla_Coils_for_Dummies/ and/or   https://www.ukessays.com/essays/engineering/structure-and-applications-of-tesla-coil-engineering-essay.php).

What about money, do you really feel that you need it? All it really is, is debt. We only have money to keep us subservient, yet why can we not live in a world where everything we need is provided for us? A world where we utilize free energy, 100% clean energy to live in harmony with our biosphere. A world where we have elders from every ethnicity, that only represent the welfare of all of us, and if they do not do their job, then they are fired. A world where we embrace our similarities instead of what we have been conditioned to think makes us different from each other. In turn, working for the sovereignty of all mankind, because we are capable of so much more as a species. We are all creatures of light and love that have been dimmed by the twisted power game of the wealthy elite. 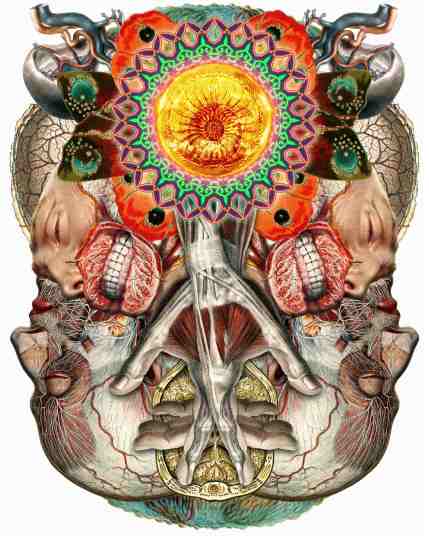 I know that we can, and will transcend the leash that we have been put on. It starts by looking within, finding the truth by causing your ego to die. Whether it be by taking plant based entheogens, or meditating, you can shed that which binds you to suffering on this plain. Through reading the Vedic texts, learning the Native and Indigenous traditions / histories, learning the real history of advanced civilizations such as Egypt, the Mayan, Greek, etc. Study about sacred geometry, quantum physics, cymatics, and the importance of frequencies and water. You will begin to understand what we are, what we can become, and where we should be going as a civilization once you begin to uncover our origin as a species. I encourage you to consider all of these things for yourself. Only you hold the key to your personal liberation from human suffering.

“If you want to find the secrets of the universe, think in terms of energy, frequency and vibration.” ~ Nikola Tesla

Bio:  Human Distortion is an East Coast activist, artist, musician, and shaman who is trying to heal the divide between man and nature. Please feel free to comment if you either agree or disagree with him. If anyone wants to reach him for clothing design, or to get active in organizing, please message Facebook: https://www.Facebook.com/Humandistortionisawesome

Like Loading...
‹ “The Temple Of My Soul,” watercolor painting by Erik Kaye
“The Real Thing” poem by Nils Peterson; drawing of Hummingbirds by Bea Garth ›