“The Real Thing” poem by Nils Peterson; drawing of Hummingbirds by Bea Garth 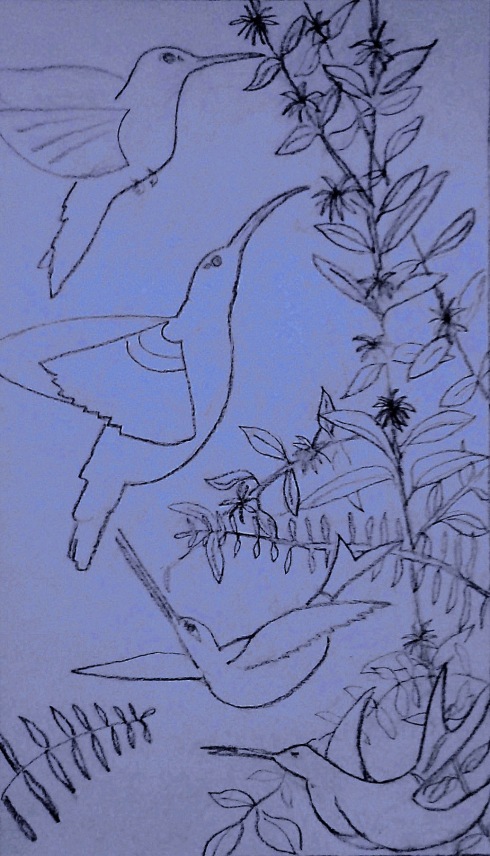 .
December – the remains of the summer garden,
stalks of sea-lavender lined with tiny blossoms,
half fresh, half wasted – among them a hummingbird
in a glistening green vest. Such hard work
this late harvesting, this hanging between fierce
wingbeats before each tiny blue bowl, long tongue
scraping out the last drops of the old year.
Twenty feet away is the feeder I fill faithfully
every few days – one part sugar to four parts water.
I know he knows it’s there. I’ve seen him grip the red
plastic rail and dip his beak again, again, watched
the surface of my offering ripple with his sipping.
Today he rejects my sugar water for flowers almost straw.
Some mornings one just wants the real thing.

Bio: Nils Peterson taught in the English and Humanities Departments at San Jose State University from 1963 to 1999. He has published poems in many journals, has written science fiction, as well as articles on varying subjects. A chapbook of poems entitled Here Is No Ordinary Rejoicing was published by No Deadlines Press, a collection of poems entitled The Comedy of Desire, with an introduction by Robert Bly, was published by the Blue Sofa Press and a collection of poems entitled Driving a Herd of Moose to Durango appeared in 2005. Nils was nominated for a 2005 Pushcart Prize. He is one of the founding members of Poetry Center San José, and the first Poet Laureate of Santa Clara County. For more info. click: https://nilspoet.wordpress.com

Bio: Bea Garth is an artist and poet as well as editor of Eos: The Creative Context . Bea has extensive skills and experience as an artist and poet and organizer/editor both in the San Jose, CA area and previously in Eugene, OR. Sometimes she  creates a drawing on the fly as she has done here to accompany the poem by Nils. She enjoys gathering art, poetry and commentary together to create a context or virtual creative community as she is doing here and has done for some years.  Currently she is busy creating a new body of paintings. She is looking for a new gallery to show her work in now that she has just moved back to the Pacific Northwest. See http://bgarthart.com for more info.

Like Loading...
‹ “Modern Propaganda: The War On Our Consciousness” commentary and art by Human Distortion
“Standing Rock” poem by Roberto Tinoco Duran; “Caduceus or The Revolution Within,” painting by Jennifer Cordiglia ›