“RIVER IN THE ROAD,” poem and photo by Lara Gularte 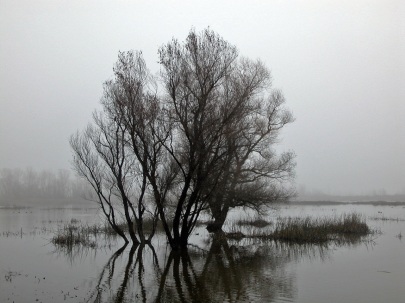 “The Land of the Drowned,” photo by Lara Gularte, copyright 2017

RIVER IN THE ROAD

A flood of stillness
widens the road,
covers the solid line.

People in rubber boots
move along the shoulder,
spilling their identities.

The missing,
a river of pulse beats
weighted down by debris.

When full morning comes
water opens like a gill,
a salmon shoots into sunlight.

Road crews wake up,
find rats and men
living together in storm drains.

A woman leans into the street,
her face a blossom falling
to the water’s surface.

“The Land of the Drowned” photo also by Lara Gularte, copyright 2017.

Bio: Lara Gularte was featured with an interview and 18 poems in the Autumn 2014 issue of The Bitter Oleander. Her poetic work depicting her Azorean heritage is included in a book of essays called “Imaginários Luso-Americanos e Açorianos” by Vamberto Freitas. Her work can be found in The Gávea-Brown Book of Portuguese-American Poetry. Her poems have appeared in such journals as The Bitter Oleander, California Quarterly, The Clackamas Review, Evansville Review, Permafrost, The Monserrat Review, The Water-Stone Review, The Fourth River, The Santa Clara Review, and she has been published by many national and regional anthologies. Her manuscript “Kissing the Bee,” will be published by The Bitter Oleander Press in 2017. She is an assistant editor for Narrative Magazine.